I was adopted into a wonderful Christian household. My dad is a pastor, so I was brought up in the church. I started dabbling with alcohol at an early age, by the time I was 18 I started using anything and everything I could get my hands on, cocaine, heroin, meth, fentanyl, etc. I was like a trashcan on the way to the dump yard. My addiction had gotten so deplorable that nothing was numbing the vacuousness in my heart.

At age 23, weighing 89 pounds, in the darkest part of my addiction, I found myself trying to end my life. But the Holy Spirit is faithful and met me at my lowest point. He is the only one who could give me the strength to get up and go get help. My parents suggested a place called U-Turn for Christ. They told me my grandpa knew the man in charge.

I came to U-turn in April 2017 and graduated first phase along with a floater month. When I came back home I started hanging out with the knuckleheads I did before. When bad news came, instead of crying out to the Lord and completely surrendering, I held onto that anger and ended up diving back into drugs again.

Two months after I left U-turn I found myself back at the ranch again. But this time it was different. I laid down my anger at the foot of the cross and completely surrendered. The Lord allowed me to be in leadership and minister to the other girls that were coming into the ranch. I am currently at the phase two women’s house. By the grace of God I have a wonderful job that I am able to show people the light of Christ.

During the second time of me coming through U-turn, the Lord gave me the story of the prodigal son. I had smashed his name into the ground and yet he still welcomed me with open arms, and had compassion on me. I was dead in sin but alive again because of Him. Luke 15:24

“For this son of mine was dead and is alive again; he was lost and is found. So they began to celebrate.” 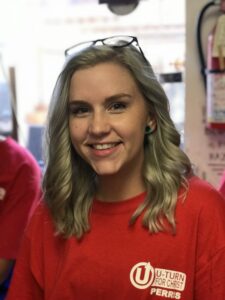